Go back in time with poodle skirts and ponytails with the fabulous Chrome '57 Band. Chrome '57  will keep your guests rockin’ and a-rollin for your sock hop, 1950's theme party and Grease theme events.  The Chrome '57 band plays all of your favorite hits from the 50's including "Grease", "You're The One That I Want", Grease Lightning", "Rock Around the Clock", "It's My Party", "At The Hop", "Shout", "Hound Dog" and many more. As the night goes on, the band slowly transitions into contemporary hits of today including "Uptown Funk" and more. This high energy band is dressed in classic 50's Grease theme attire adding the "Wow" factor that will leave your guests wanting more.
Click here for: Song List and Audio Samples.
The Chrome '57 Band is one of Florida's most versatile, prestigious, and sought after musical groups. Reliable and experienced, Chrome '57 is the ultimate theme party band that keeps your dance floor packed. Based out of Orlando, they specialize in corporate entertainment and charity galas.   The members  in the Chrome '57 Band are full time musicians at Walt Disney World's Magic Kingdom.
​
Performing over 140 events annually, Band leader/trumpet player Mark and his bands are preferred vendors for Walt Disney World, Universal Studios, Disney Cruise Lines aboard the Disney Dream, and frequently perform at The Breakers in Palm Beach,  the Four Seasons Resort Orlando, the Ritz Carlton, and many more.  Their bands have opened for Sting, Taylor Swift, Howie Mandell, and Montel Williams.  They've performed for Ed McMahon, Hulk Hogan, Norman Swarzkopf, and Fortune 500 Corporations including corporate events for McDonalds, HGTV,  Macy's Cisco, and the prestigious INC. 5000 Gala Awards.
The Chrome '57 Band features band leader, trumpet player, and vocalist Mark Zauss  and female vocalist Kathy Zauss along with the Chrome '57 horns, guitar and percussion. Combining creativity with today’s technology and innovation allows our musical groups to have a full and authentic sound true to the original artists. 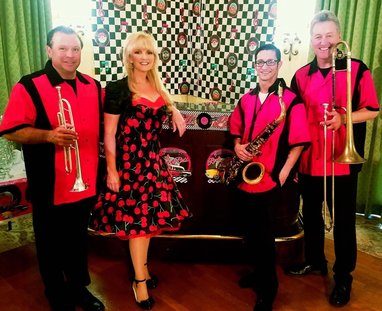